Dumba, the elephant hidden by a circus in a rubbish dump in Gard

It was after 10 pm on 1 January 2021 when we heard: at the end of a dirt track in a remote corner of the Gard countryside a single elephant constantly rocks back and forth in a tent, in the middle of a rubbish dump – a few square metres to move around in. Immediately despatched to the spot, our investigators are shocked to discover that it has snowed, that the thermometer registers well below zero and that the elephant is shut in the trailer of the wagon opposite the tent. Dumba breathes heavily, sniffing the air with her trunk, which pokes out of a tiny half-open window in the roof. She has injuries on both sides of her head. We have submitted a complaint about her situation as a matter of urgency.

Dumba is over forty and her feet are so painful that she twists and turns even in front of strangers in an attempt to obtain relief.  The forced immobility and solitude to which she is subjected daily cause muscle wasting, musculo-skeletal pain and stereotypic movements.

Just like other elephants held in captivity by circuses, she was snatched from her family while she was a baby.  She has never been seen in the company of another elephant since.  Just like Baby, she is kept in solitary confinement by her trainer and rented out to the highest bidder for videos and performances.  Forced to have her photo taken with members of the public (which is illegal), in particular in the Cirque de Paris, she crossed paths with Jon, Patty, Marli, Céleste and Hannah before we obtained their release.  We had hoped to find her in March 2020 when we followed the Cirque de Paris.  On its usual site:  Baby.  She hadn’t been seen again in France since the end of 2018.  In Spain, where we are working in solidarity on her behalf with FAADA (Fundación para el Asesoramiento y Acción en Defensa de los Animales – Foundation for Advice and Action in Defence of Animals), she had been off the radar since the end of September 2020.

But one of our sympathizers came across her while out for a New Year walk, in an area that literally looks like a rubbish dump.

France, this refuge for trainers prosecuted for mistreatment. Her trainer had fled Spain with her in order to avoid court proceedings.  It would have been very easy for him to flee once again in order to hide Dumba elsewhere.  It was therefore essential that we act speedily.  Within a few hours we had despatched our investigators.

Foot problems are the main cause of death in elephants.  Dumba's feet and her whole body are suffused with acute pain;  she is the very incarnation of suffering.  Elephants live in groups and continually communicate with one another in a very sophisticated way.  They help and support one another until they die.  Dumba is alone in her agony.  What sort of advanced country is it that still authorizes the abysmal mistreatment of these vulnerable giants?  I love elephants, I love my country, and I am ashamed.

The opinion of the expert on elephants to whom we sent the images was irrefutable:  skeletal problems, possible tuberculosis … injuries.  “The physical condition of this obviously elderly Asian elephant is very poor.“

«There are clear indications that this elephant is suffering from pain in her front legs, as shown by her alternating lifting of these legs and the fact that she brings her rear legs far cranial under her body.»

«The elephant keeps her mouth open for a much longer period than is expected and normal, which often is an expression of pain experience.»

«Keeping an elephant solitary for a prolonged period is an act against the welfare of the animal and as such illegal. When continued for several months and longer it inevitably changes the mental health permanently and irreversibly, expressed as stereotypic behaviour.»

We have submitted a complaint of ill-treatment and neglect by a professional (an offence) to the court in Alès. Added to that is illegally operating an establishment keeping non-domestic animals. The seizure of Dumba must be organized as quickly as possible; a place in a sanctuary already awaits her. Sign the petition and let us join together to appeal to the relevant minister, Barbara Pompili, because we shall never abandon those whose suffering is scandalously hidden from view: circus animals!

Exploited under the big top, rented out to the highest bidder, kept in isolation in a wagon in the depths of winter – that’s what Dumba’s life is like as a circus animal. @barbarapompili this suffering must stop! #FreeDumba #CirquesSansAnimaux

For Dumba: no more animals in circuses, travelling or permanent!

Dumba is 43 years old.  Like all ‘circus’ elephants she was snatched from her family when very young.  She has spent thirty years being driven from town to town and from country to country in a wagon and exhibited to a public both ignorant of and blind to her suffering.

For several months Dumba disappeared.  One Voice has just found her again in an isolated rubbish dump in Gard, in the south of France, where her trainer had fled to escape Spanish justice.

Separated from her family, shut up in a wagon or under a small open-sided tent battered by winds and snow, she is suffering agony.  She is injured and also sways from her right feet to her left, which her posture and movements show to be very painful.  Her musculo-skeletal and pulmonary problems require both urgent veterinary treatment and a radical change of lifestyle.

Often appearing at the Cirque de Paris, Dumba is entitled to a place in a sanctuary!  One Voice has reserved one for her as from tomorrow if the political will is there.  The time for discussions and compromises is over:  there must be an end to the torture of animals in circuses, both travelling and permanent!

I the undersigned join One Voice’s fight for Dumba and against the tyranny inflicted on animals in circuses, both travelling and permanent! 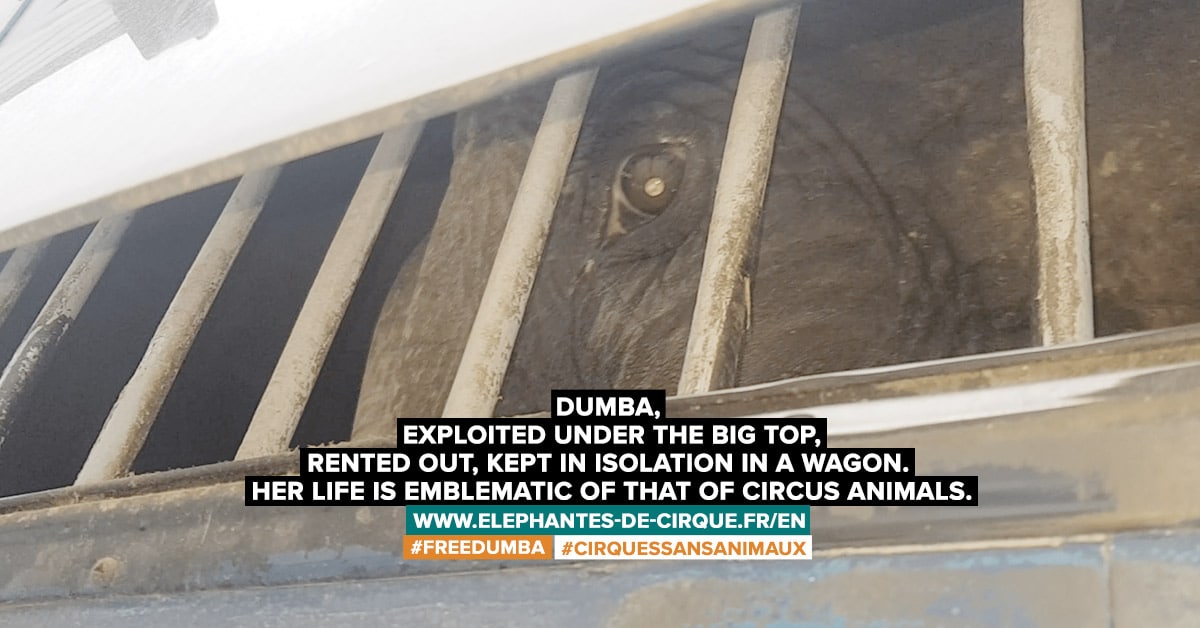